Capalaba Park Shopping Centre’s friendly atmosphere is the location you will find the team at Bay Audio Capalaba.

Our team is on site at the following times to assist you:

This will provide you with instant results. This type of high-tech screening is unique to Bay Audio, and empowers you to take control of your hearing health.

At Bay Audio Capalaba there are a number of ways our friendly team of professionals can assess your hearing for you.

If you are in a hurry, you can take our Free 5 Minute Touch Screen Hearing Check, which will provide you with instant results.

Alternatively, you can book a free, no-obligation full hearing exam that will always deliver you with the best hearing outcome to suit your personal circumstances.

Nearby landmarks and directions

The Centre has over 2,000 car parks including two levels of undercover parking for 1,600 cars – the best in the Redlands. Disabled and Parents with Prams parks are provided at all major entrances to the Centre.

The Capalaba Bus Station is located directly across Redland Bay Road from the Centre. This station is serviced by the Translink bus routes and is the Primary interchange for the Eastern region. The bus station is the transport hub of the Redlands allowing customers to access their chosen Redlands destination.

A taxi rank is located at the Main Entrance at the front of Centre Management. A Yellow Cab courtesy phone is provided at this taxi rank.

The closest train station to Capalaba Park is Birkdale Station. You can catch Bus 254 from Birkdale Station which will drop you at Capalaba Bus Station (stop A) directly across the road from our Centre. 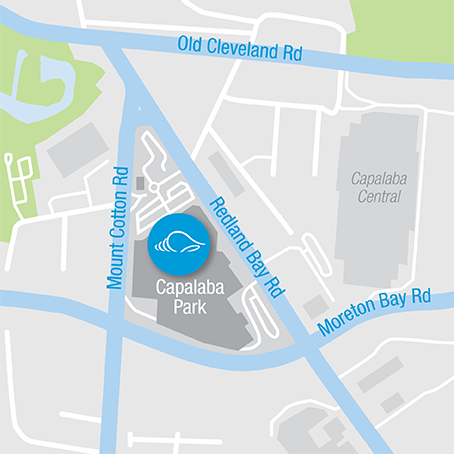